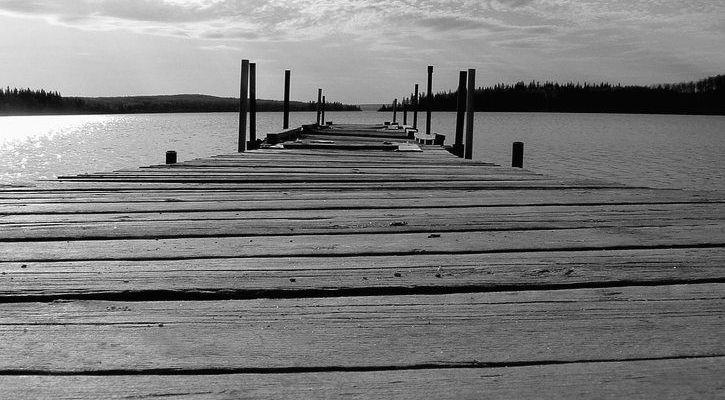 On December 18th a number of years ago, I was called to my boss’s office and told that my contract was not being extended after Christmas. It was a purely financial reason for them but it still stung. For one thing, we were barely making it paycheck-to-paycheck. Ever looming were the potentially severe consequences if we were unable to keep up with certain debts. In my field, jobs are easier to come by in February and March; definitely not in December. And we could not make it until February without my paycheck.

I drove home from work that day in a funk. Depressed, anxious, worried, fretting about what I could do. Nothing came to mind. When I arrived home, I didn’t tell my then-wife straight away. I went to the bedroom, laid across the bed, and closed my eyes.

What happened next is still difficult to adequately explain. If I hadn’t been there, I would probably have trouble believing it. But right after I closed my eyes, in my mind I was suddenly sitting on the end of a long pier. Kind of like the one pictured above. I don’t mean I had a dream or a thought; I mean it felt like I was there. I no longer felt the bed beneath me, I felt I was actually sitting on a pier with my legs dangling over the water. It was the strangest feeling to be suddenly in a different environment with no warning.

In front of me was a slow-moving river. On the other side of the river I could see thick woods, full of trees. Above me was an overcast sky. Everything was gray: the sky, the trees, the river, the pier; everything was gray. There was no color. The only sound was the gently moving water beneath my feet. No birds, no people, no airplanes, no wind.

As I was trying to grasp what just happened, I heard slow soft footsteps coming down the pier toward me. I wasn’t alarmed. I somehow knew I was in no danger. When the footsteps came very near, they stopped behind my right shoulder. The person didn’t speak yet I knew I didn’t need to turn and look; I knew it was Jesus. I know, that sounds crazy. And I would consider it was all in my head except for what happened then.

Without turning around, I said the only thing I could think to say,

After a brief pause, the Jesus behind me said,

“Then it’s a good thing we’re here together.”

That is how I know I didn’t imagine it: if I created the story, Jesus would have said something like:

“Haven’t I always taken care of you?”

Peace flooded in. It was wonderful, beautiful, serene.

The visual experience ended as suddenly as it began. I was back, laying across the bed with my eyes closed. The peace remained.

To wrap up the story, a recruiter called me out of the blue the very next day and asked if I could interview immediately. I did, and the interview panel informed me that I was the 112th person they had interviewed for the position. I got the offer from the recruiter within an hour, and I started to work on December 26th. I didn’t miss even one day of work. But that’s just the pretty ribbon on the gift.

It’s a good story. But the story itself isn’t the point. Sharing one’s life events with another who loves us as we are is precious, priceless. For me, it helps correct my perception of the world and what’s wrong in it. It also adjusts my perception of me.

Jesus is like that to me. I have some humans who love me well. Quite a number of them. I am extravagantly wealthy that way. I’ll never be rich but I am richly loved by some people.

“Barry the Builder” and I have been walking out life together for a few years. He’s not really a builder but he is always eager to join me in some project at the house; especially demolition work. If I hesitate at knocking out a wall, Barry steps in and BAM!… no more wall. I believe there’s an obvious parallel to my spiritual walk.

“Neil the Walking Concordance” came into my life a while ago; that relationship has done much to help me get a better handle on certain aspects of my spiritual life. Not only does he know a lot of Bible verses by heart, he knows where they are in the Bible. Without looking them up. And he seems to know what they mean. It’s amazing. Especially when I start reciting some verse incorrectly, and he says “actually, it says…”.

Barry and Neil are two examples of how “it’s a good thing we’re here together” works. They help me walk through reality as it is, rather than distorting reality to fit how I’m currently thinking (or wishing). They love me, and I love them (although their taste in friends is questionable). There are other people too; I’m sure they will show up in future posts as well.

Having people that really love you doesn’t mean circumstances change necessarily. But they bring the promise that we will not bear those circumstances alone. And that is a priceless gift I treasure.

2 thoughts on “Here Together”