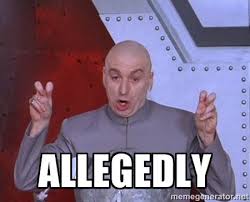 In my lifetime, the word “allegedly” has become something of a joke. It seems the word now means “not yet proven guilty”.

Many of the news stories this week were about male celebrities getting fired from their jobs for allegedly demonstrating undesirable behavior of a sexual nature. It has been in the news for weeks, actually. On October 25th CNN created a list of “powerful men accused of sexual harassment”. Lots more men have been added to the list since. Matt Lauer, Charlie Rose, Glenn Thrush, Louis C.K., Jeffrey Tambor, Ed Westwick, Brett Ratner, Kevin Spacey, Ken Baker, Mark Halperin… The list goes on and on, and it will get much longer. If we also listed all the men without celebrity or fame that were allegedly guilty of similar behavior, we’d be here for months.

I didn’t want to write this post because (before I met Jesus) I used to act like those guys. It is a shameful thing for all involved, and shame is one of the reasons this stuff goes on for so long. Few people want to talk about it, and fewer still will admit to it.

I heard a man tell of attending a women’s conference with his wife, where the speaker asked the men to raise their hands if they had ever felt threatened. About 10% of the men raised their hands. Then the speaker asked the women to respond to the same question and every hand went up. The message was clear: at some point in their lives, most women will feel threatened. Usually by a man.

We should be praying for the women (and other men, as the case may be) that were impacted by these incidents, and show them love and grace. They need the unconditional love of God as much as any of us. We can pray for wise and healthy counsel for them, for healing, for safety and protection. We should be praying for women every day.

Vilifying the men may make us feel better on some level but it does not (a) help them get better, or (b) help their victims get better. Destructive behavior and choices won’t get a chance of being addressed while the accused/guilty is in a defensive posture.

“The sacrifices of God are a broken spirit; a broken and contrite heart, O God, you will not despise.” Psalm 51:17

We should be praying for these men; and we are commanded to love them. We don’t have to like them or their behaviors, but we are told to love them. And forgive them. We can pray, in this time of their “downfall”, these men will hear the good news about Jesus, and find what their hearts have really been desiring all this time: the unconditional love of God Himself.

To be clear: we should not tolerate these behaviors.

Perhaps you, or someone you know, has been affected in a similar way – on either side of the behavior. Take a chance and talk to someone you trust. There is help available, and there is hope. For both sides.

“I came that they may have life and have it abundantly.” John 10:10

We do not have to choose sides. Followers of Jesus have already chosen which side they are on.

“All this is from God, who through Christ reconciled us to Himself and gave us the ministry of reconciliation” 2 Corinthians 5:18

We are ministers of reconciliation. And I don’t mean allegedly.

May the grace and peace of God be with us.